A Florida woman claims Southwest Airlines kicked her off a flight — as the pilot “laughed mockingly” — because she kept removing her mask to drink water, new court papers show.

Medora Clai Reading, 68, said that when she bought the ticket for the Jan. 7, 2021, flight to Palm Beach, Fla., from Washington, DC, she notified the booking agent she is medically required to drink water constantly, according to a $10 million lawsuit filed in Brooklyn federal court.

She told Southwest she suffers from “a heart condition, severe hypoglycemia, claustrophobia and is subject to fainting spells (particularly when her breathing is labored and/or she is placed in particularly anxiety-producing situations),” the lawsuit states.

Reading claims her disabilities are “triggered by wearing a face covering” and told the agent she would need a medical accommodation for the flight.

The employee told her that although there was no exemption from the masking requirement, she could board the plane first for an “early bird” fee, sit in the front of the cabin and remove her mask to eat and drink.

But when she arrived at the airport, the gate supervisor told her that Southwest “does not care” about her disability and that no accommodation would be allowed, according to the suit.

Reading said she decided to buy a drink when she felt her blood sugar dropping, but that a gate attendant told her to discard it before boarding — even though passengers are allowed to have beverages purchased after the security check, the suit states.

After taking her seat, she asked a flight attendant for some water.

“Why, do you need to take medication?” the crew member allegedly asked.

Reading, who was feeling faint, told her that she suffers from a medical condition that requires her to drink and offered to show her a medical exemption card, according to the filing.

“We don’t care,” the flight attendant allegedly shot back before handing the woman the water — but adding: “Your face covering must remain in place at all times,” the suit says.

When Reading slipped her mask below her chin to take a sip, the flight attendant “harshly reprimanded her.” 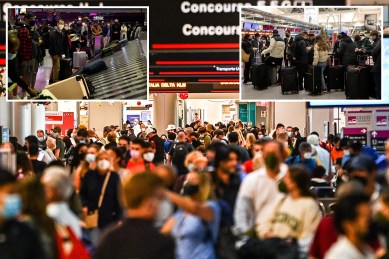 Florida woman, 68, sues Southwest Airlines for $10 million after hostile flight attendant removed her from the plane before takeoff because she removed her mask to drink water

Read Florida woman, 68, sues Southwest Airlines for $10 million after hostile flight attendant removed her from the plane before takeoff because she removed her mask to drink water by Daily Mail

Southwest passenger sues airline for $10 million, claiming she was removed from a flight for taking her mask off to drink water

Read Southwest passenger sues airline for $10 million, claiming she was removed from a flight for taking her mask off to drink water by YAHOO!News