Addressing MPs in the Commons, Patel said Britain had given its “unflinching and generous support” to France to tackle the problem but said co-operation must go further.

She said: “I have once again reached out and made my offer very clear to France in terms of joint France and UK co-operation, joint patrols to prevent these dangerous journeys from taking place.

“I have offered to work with France to put more officers on the ground and do absolutely whatever is necessary to secure the area so that vulnerable people do not risk their lives by getting into unseaworthy boats.”

Patel added: “This is about addressing long-term pull factors, smashing the criminal gangs that treat human beings as cargo, and supply chains.

“Yesterday was the moment many of us had feared for many years. The criminals who facilitate these journeys are motivated by self-interest and profit, not compassion.”

Patel was warned by senior Tory MPs that failure to stop thousands of migrants entering the UK would risk alienating Brexit voters.

Sir John Hayes, a former immigration minister who chairs the Common Sense Group of backbench Tory MPs, warned: “People who voted to take back control, have every right to ask the question, if you can’t protect the integrity of your borders, what can you control?”

Speaking during a visit to Croatia, Macron said he would hold the UK to account, but also opened the door to potential co-operation with Britain.

“We are going to ask for extra help from the British because all these men and these women don’t want asylum in France. We tell them they’re obviously able to do so, and there are centres in Calais and Dunkirk where they can go, but we’re going to reinforce in fact saving them at sea.

“We want to better integrate also the British to prevent these flows by dismantling the [smuggling] networks. We’ve being doing that in the last few weeks.”

Paris appeared to be angered today by Johnson’s claim last night that the French were not doing enough to stop migrants crossing the Channel.

The Élysée said that Macron had told the prime minister in a phone call last night he expected “the British to co-operate fully and to refrain from using a tragic situation for political purposes”.

The presidency said that Macron had “insisted on the need to act with dignity, respect and in a spirit of efficient cooperation with regards to human lives”.

Darmanin said that five alleged smugglers had been arrested but the prosecutor’s office in Lille said there was “no objective link” between the suspects and the boat that capsized. 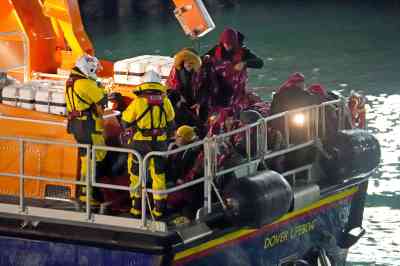 Migrants being brought ashore on the Dover lifeboatGARETH FULLER/PA

Carole Etienne, the state prosecutor in Lille, said that the dead included 17 men, seven women, of whom one was pregnant, and three children: two boys and one girl, all of whom appeared to be teenagers. There were two survivors of Iraqi and Somali nationality.

The situation has escalated into a crisis with more than 26,000 arriving by small boats this year, three times the number at the same point last year.

Darmanin said police believed that 34 people had been crammed into an “extremely flimsy boat” that deflated like a paddling pool and went down. But La Voix du Nord, a regional daily, said that the boat appeared to have been hit by a large vessel, probably a container ship.

After the French coastguard made the mayday call, they sent out an urgent request for “all ships” in the Channel to get the area to help.

Charles Devos, regional manager of the lifeboat association (SNSM), was one of the first people to arrive, likening the scene he encountered to the wreckage of the Titanic.

He was able to drag six bodies from the water, including a pregnant woman, but none had survived.

“I saw the blow-up boat had really deflated. Was it a valve that came loose or did it hit an object? You never know but I don’t think it was a collision.

“It’s very, very shocking. It was a bit like the film Titanic when you saw all these people plunged into the water, drowning, with no means of being able to be rescued.”

Darmanin said the smugglers were “criminals, people who exploit the misery of others, of women and children”. He told the French radio network RTL: “There were pregnant women, children who died yesterday on that boat ... and for a few thousand euros they [the smugglers] promise them ‘Eldorado in England’. And sadly, this has been repeated every day for the last 20 years.”

He said that people smugglers were exploiting the “lack of cooperation” between France and Britain and added that he had recently sent Patel a list of requests from French police seeking help in dismantling the gangs. Officials in Paris regularly claim that such requests go unanswered.

Natacha Bouchart, the mayor of Calais, said she had written almost daily to ministers warning that a tragedy of this sort was “bound to happen”. She said her warnings had been ignored by a government that had failed to give French police the means to fight people-smuggling gangs that were charging migrants from €2,700 to €7,000 to reach the UK. “I say: enough is enough,” she said. 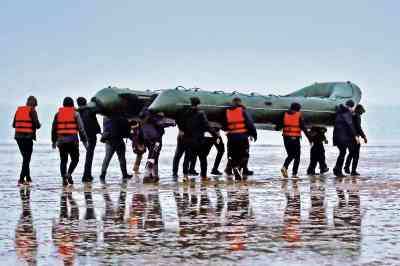 Migrants preparing to launch a boat into the Channel near Wimereux yesterday. More than 26,000 have arrived in the UK this yearGONZALO FUENTES/REUTERS

Franck Dhersin, vice-president of transport for the northern Hauts-de-France region, told the French TV station BFMTV: “In France what do we do? We arrest the smugglers. To fight them, there’s only one way — we need to stop the organisations. You need to arrest the mafia chiefs.

“And the mafia chiefs live in London … They live in London peacefully, in beautiful villas. They earn hundreds of millions of euros every year, and they reinvest that money in the City. And so it’s very easy for the tax authorities to find them.”

Migrants continued to arrive on British shores this morning after 600 came yesterday. The number of people crossing this year has risen each month until September, when it reached 4,653. It dipped to 2,669 in October but has climbed again steeply this month to more than 6,000.

Before yesterday’s tragedy 14 migrants had drowned this year, French officials said. Yesterday alone 671 were stopped from crossing by the French authorities, according to Darmanin.

The Mediterranean remains more deadly. An estimated 1,369 migrants died crossing from north Africa to southern Europe from January to September, according to the International Organisation for Migration, a UN body. 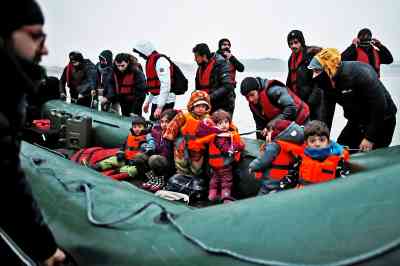 Natalie Elphicke, the Conservative MP for Dover, has called for increased patrols on the beaches of France to stop crossings.

She told BBC Breakfast: “Yesterday we saw footage of French police standing by while people got the boat ready, picked up the engine and took to the water on the French side.

“They did absolutely nothing. That’s unacceptable and that’s got to change. It is vital that action is taken and the only way to do that is to stop people on the beaches of France from getting into the boats and turning them around quickly in French waters.”

Q&A: Why do migrants cross the Channel and why can’t the UK return them to France?

However, the MP for Calais said he did not think that more patrols around the French coast was the solution. Pierre-Henri Dumont told Today on BBC Radio 4: “I’m not sure that having more police officers or more materials on the French shore will help to stop these crossings because we have 200 or 300 kilometres of shore to monitor 24/7.

“It only takes five to ten minutes to take a boat and put it at sea filled with migrants so I’m not sure it is only a question of money and the number of men.” 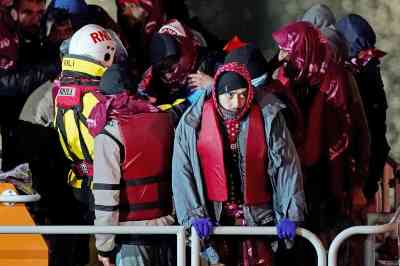 Asked about the UK’s proposal to provide patrols of the French beaches, Dumont added: “No, that wouldn’t work. To monitor all the shore would take thousands of people. There is also a question of sovereignty — I’m not sure the British people would accept it the other way round, with the French army patrolling the British shore.

Pregnant woman and three children among 27 drowned in Channel

Read Pregnant woman and three children among 27 drowned in Channel by thelondoneconomic.com

Read Britain and France escalate war of words after dozens drown in Channel tragedy by CNN on MSN.com

France and Britain spar over illegal migration, after at least 27 drown in English Channel

Read France and Britain spar over illegal migration, after at least 27 drown in English Channel by Washington Post