The Islanders, while frustrated with their Game 3 loss against Tampa, have optimism give their track record when put in this position in previous rounds. After suffering a rollercoaster 5-4 loss to the Pittsburgh Penguins in the first round and a stunning  2-1 OT loss to the Boston in the second round, the Islanders were able to go on and clinch both series in six games.

While there's no rhyme or reason to the sequence of all three series resulting in a road split and being down 2-1 in the series through three games, the Islanders know this path with the Lightning won't be easy. So, they're taking it game-by-game and focused on the next task of Game 4 on Saturday at Nassau Coliseum where they hope to even it up 2-2.

"We've had success even being in this position the last two previous times," Trotz said. "Just take care of business here. If you haven't done it, you always have that doubt. But we've done it twice already so there should be no doubt in our guys. We didn't lose the series last night, in some ways the series might have just begun."

The Islanders got a taste of their own game as the Lightning executed a defensive clinic - highlighted by 21 blocks - and were able to lock down the third period with just a one-goal lead.

With both teams stifling any form of offense, it was no surprise that the three goals scored between clubs were on gritty efforts off of rebounds around the netfront. Yanni Gourde had put the Lightning up 1-0 in the first period as a bad bounce allowed Gourde to bury a backdoor, sharp angle look from Blake Coleman's redirect on net.

Cal Clutterbuck had delivered the Islanders the equalizer late in the second period as he jammed in a loose puck through Tampa netminder Andrei Vasilevskiy. The tied score was short lived after the Bolts were seconds off of an unsuccessful power play - on an Adam Pelech interference call - and capitalized with Brayden Point's game-winning goal. 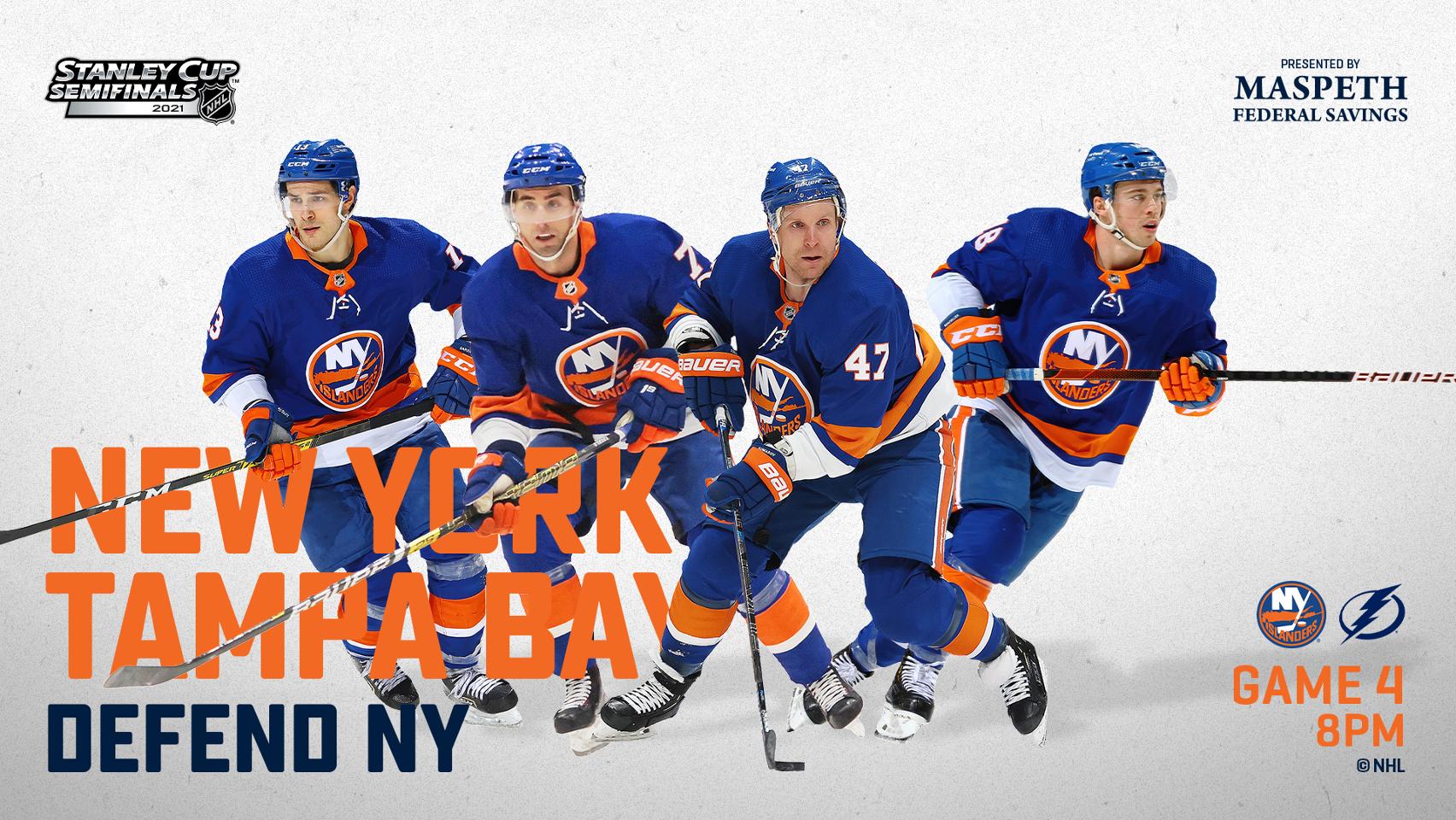 The league leader in goals (11) beat Semyon Varlamov as he buried a loose puck from the Islanders' netminder to deliver the game-winner for the Lightning.

While Tampa played a grungy, disciplined and hard-nosed game, the Islanders did have their chances. They generated some promising looks, but couldn't decode some of the acrobatics and timely saves from Vasilevskiy.

"We've got to get to the net a little bit better," Trotz said. "The chances we did have, Vasilevskiy made some key saves, just like [Varlamov] did. It really was an even game for me. It's a matter of inches, a matter of play."

The Islanders have utilized the same lineup of skaters since Game 6 in the first round against the Pittsburgh Penguins, as a result of Travis Zajac joining the lineup in place of Oliver Wahlstrom, who left Game 5 with an lower-body injury.

The coaching staff has rolled with this group of skaters since that point and utilized the same combinations even when things haven't gone their way. While Game 3 against Tampa was still a strong effort from the Islanders, who felt their game is 'trending in the right direction,' Trotz noted that he and the coaching staff are evaluating all options. Ahead of Game 4, they'll have a conversation regarding lineup personnel.

"As a coach, when you're looking at it, you look at 'Did you play a bad game?' No, not really. 'Did you play well enough to win?' Yes. Well, we didn't win," Trotz said. "It's no different than Game 3 against Boston, I thought we had a real strong game and could have won. You go away from that game and make changes or do you give that group a shot and say, 'Hey, this is going. We've just got get to the next game. It's inches. You've got to win your inches and you win the game.' That's really what we're going through with our lineup."

Wahlstrom, who left Game 5 following a collision along the boards, has been sidelined since then. The rookie winger, who boasts a precise shot and adds size with his sturdy 6-foot-2, 205-pound frame, is a potential option to draw in the lineup. Wahlstrom has been a full participant at practices and partook in warmup ahead of Game 3.

"I have a lot of faith in what [Wahlstrom] can do. He is an option for us going forward here," Trotz said. "We've got a big discussion on if he comes in the lineup or not in the lineup. We haven't made any decisions. We're looking at what we have available. We'll make that decision."

STICK TO THE PROCESS

The oddity of being down 2-1 in all three series to this point provides some valuable experience for the Islanders to leverage especially as they're tasked with higher stakes against a high-caliber opponent in the reigning Stanley Cup champs.

For the Islanders, they felt that Game 3 was a better all-around game compared to their 4-2 Game 2 loss. Trotz noted he didn't like their first period effort, but that their second and third periods were strong. They were disciplined, only allowing Tampa one power-play opportunity, defensively solid, outhit the Bolts 39-26, but just couldn't break through to get that extra goal to at least get to overtime.

"You park it and look forward to the opportunity [in Game 4]," Trotz said. "We look back at those previous experiences and we've had good success. There's no reason for us to have any doubt that we can't do it again. But it's on us to do it, not hope or anything like that. We put in the work, it's not going to be easy. The longer you go in the playoffs the teams get better and better. You've got to really dial in your game and dial in the effort. You can't have any passengers. Everyone's got to pull on the work really hard and you usually have success. It's all about the process versus the results. If you stick to the process we'll be fine."

•   The Lightning scored the opening goal and improved to 10-1 this postseason when striking first.

•   With the road win, the Bolts improved its current road winning streak to four games.

•   With an assist on Point's goal, Victor Hedman posted his 14th point (1G, 13A) of the playoffs and leads the NHL in scoring among defensemen.

•   Kucherov recorded a secondary assist on Point's goal for his league-best 23rd point (5G, 18A) of the playoffs. The Russian winger is also riding a six-game point streak with 11 points (2G, 9A) in that stretch.

•   With a 27-save performance, Vasilevskiy improved his record to 6-1 on the road (1.58 GAA, .953 SV%, 1 SO) during the 2021 postseason and has only allowed one goal or fewer in each of his last four contests as the visitor dating to Game 1 of the Second Round, according to NHL Public Relations.

Islanders in familiar series hole, down 2-1 vs. Lightning

Read Islanders in familiar series hole, down 2-1 vs. Lightning by USA Today

As New York Sports Return to Normal, the Islanders Lead the Way

As Lightning look to pad lead, Islanders search for answers

Read As Lightning look to pad lead, Islanders search for answers by CBSSports.com

Lightning’s shot blocking pays off in Game 3 win vs. Islanders

The ‘ungodly’ scenario Islanders can’t be baited into again